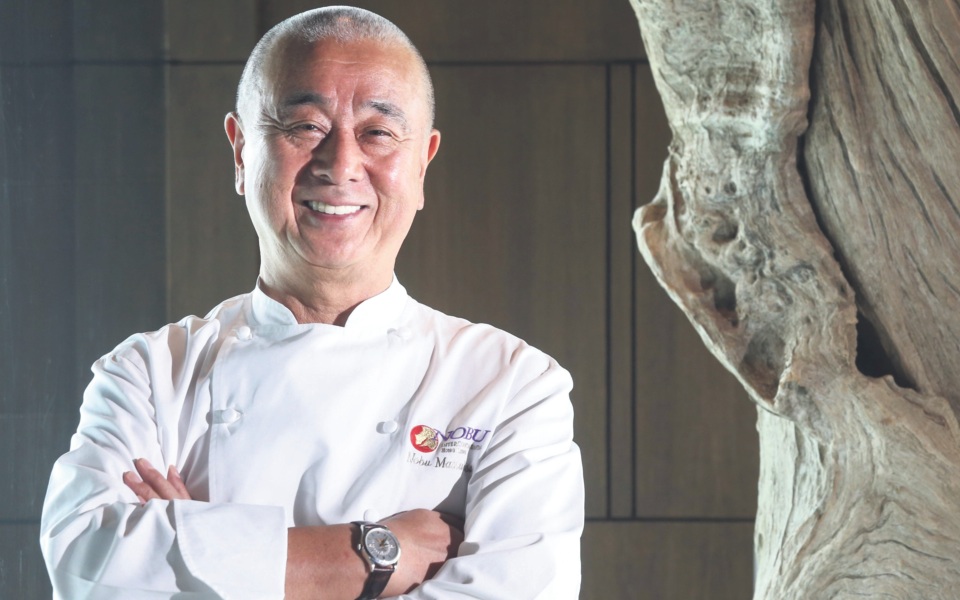 Who are you and what do you do?

I am Nobuyuki Matsuhisa, also known as ‘Nobu’, sushi chef proprietor of Nobu and Matsuhisa restaurants, author and father. I currently own 49 restaurants in 44 cities on five continents around the world.

What’s new at Nobu in London?

We are hosting a series of ‘Tastemakers’ dinners at Nobu Berkeley Street, which we hope to roll out across our London restaurants and perhaps beyond. The next dinner will take place on Tuesday 5 November – members of the public will be invited to sample and rate dishes that will be chosen for December’s Omakase menu. I’m excited to put this in the guests’ hands.

I remember the tap-tap-tap of my mother’s knife on the chopping board and the scraping of the pot against the burner as she prepared miso soup and pickled vegetables every morning. This is common in Japanese families and each family has a slightly different recipe.

What’s the best thing about the London food scene?

Before Nobu London opened in 1997, London’s food scene was quite limited. That’s why I decided to open Nobu here – to introduce sushi and Japanese cooking to Londoners. Since then, I have seen the market grow and I’m really proud to see the food of my culture being accepted and enjoyed over here with such variety. I love to hear of more good quality Japanese restaurant openings, to see how other people put their own spin on it.

And the worst thing?

With so much choice out there, there’s a lot of pressure on restaurants to compete with each other and this can compromise the service and quality of food.

When I was living in Lima, I found a conger eel, which the Peruvians were not accustomed to eating. I quickly realised I could bargain them to a very low price, pretending I was buying them for my dog – the vendor insisted on giving them to me for free. Needless to say, I gave him some money and the special in my restaurant that evening was conger eel. It soon became a popular item on our menu. Soon after, another Japanese chef went looking for some at the market and came across the same vendor, who asked if he also had a dog to feed. The next time I saw the vendor, he gave me a wink. The truth was out and Peru has since become an exporter of conger eel.

The government is considering plans for an extra bank holiday in October to give some respite to the UK’s battered to...

Cruise operator Carnival has announced plans to lay off staff to conserve cash after suspending sailings due to the cor...

The EU has lain out new guidelines for member states to use to reopen their borders and encourage tourism as the bloc s...

The UK’s leading travel association has called on the government to extend the time period in which holiday firms mus...

Londoners may not be packing the streets for the 75th anniversary of VE Day this Friday, but the capital’s screen arc...

Experiencing The Finest Of The Alps On A Golf, Wine And Wellness Exclusive Adventure

Leo Trippi’s exclusive golf, wine and wellness itinerary across Switzerland is the perfect escape for friends and fam...