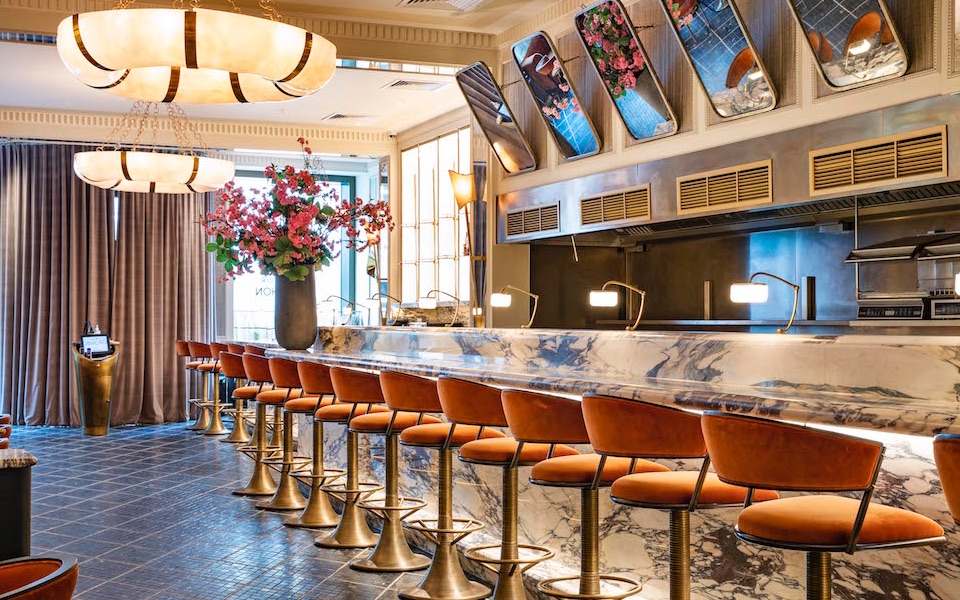 Time has become airy and fugacious, like a fine mousse. Days drag on for weeks, but months pass in no time at all. Le Comptoir Robuchon opened a year ago, and yet it still feels like a new opening.

Read more: The top wines to drink this Christmas, from cooking to pudding

It had a couple of months to show off its homage to the legacy of the greatest chef who ever lived before it was tossed into the spin-cycle of coronavirus. What a shame, because it’s a brilliant little restaurant, fun and vibrant, just the tonic for this crappiest of years.

At least it’s now open again, for the time being at least, although by the time I press ‘send’ on this article we may be plunged back into the virtual lockdown of Tier 3.

What is Le Comptoir Robuchon?

In theory it’s a relatively casual spin on the cuisine that earned Joël Robuchon the “Chef of the Century” award, although in this case the word “casual” should be filtered through the prism of Mayfair dining. The letter-box shaped dining room is dominated by a relaxed bar overlooking the open kitchen (“comptoir” means counter), and there is sharing concept, but this is still very much haute cuisine, with all the accoutrements that suggests and a price tag to match.

The dining room is quietly palatial, what a Left Bank cafe might look like had it been hewn from a single block of marble. Through the magic of acoustics, it managed to feel relatively buzzy even through the gloom of social distanced dining, so expect a lively atmosphere once it’s back to full strength.

The menu is a combination of classic Robuchon dishes and new ones dreamt up by head chef Dario Avenca. There’s also some Japanese dishes because, well, we’re in Mayfair.

It would be a pretty major scandal if it weren’t up to snuff – even two years after his death, the name Robuchon still holds more weight in the food world than a lot of big-name chefs who still inhabit this mortal coil. It doesn’t disappoint, with the (rather unwieldy) menu filled with fascinating little flourishes and theatrical spins on classics.

Le Poireau (as in “leek”, not to be confused with “Poirot”, the mustachioed detective) presents its smoked leek, mimosa eggs, shiitake mushrooms and croutons as it were a reconstructed leek; the pate selection, sliced and plated by the table, drew envious looks from fellow diners.

The langoustine ravioli in foie gras sauce – a Robuchon special – is in a class of its own, perfect little parcels, the exact amount of bite to the pasta and crunch to the langoustine – undoubtedly the best thing I’ve eaten all year, albeit a year in which my horizons have been somewhat smaller than they might have been.

We’re also well into truffle season, and Le Comptoir Robuchon isn’t missing that trick. It came in various guises: first riding a crunchy gondola as an amuse bouche, but most notably liberally grated over spaghetti and slow-cooked egg, a combination that’s just absurdly tasty. The black truffle version costs £70; we went for the off-menu white truffle version, and it’s best not to dwell on trifling details like monetary value.

The sommelier is first class, gracefully negotiating the pitfalls of selecting wine for a bunch of sharing plates, not to mention the indecisiveness of the clientele. She looked on sympathetically as we desperately tried to find the bottle of 2014 Guffens-Heynen Macon Pierreclos ‘Tri de Chavigne’ to buy online. It’s available by the glass here but only by the case to punters like us.

If you’re looking to dive back into London’s dining scene, what better place to start than with a new venture underpinned by the culinary foundations of Joel Robuchon? And with the coronavirus door perhaps about to blow closed once more, you’d better book a table sooner rather than later…

The Top Films Of 2020, From Parasite To Mank

The absence of cinema releases for much of 2020 gives this year’s ‘best of’ film list a strange new context, as t...

Disney Plus has announced plans to increase its subscriber target by 2024 to between 300-350m overall subscriptions. ...